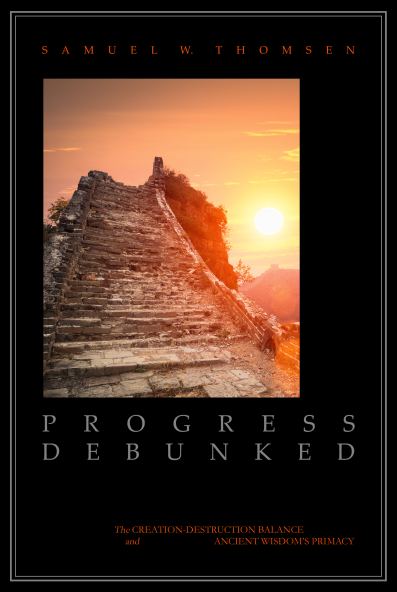 Advance Praise for Progress Debunked
“Extremely important and quite brilliant … A logical argument for why progress is inconsistent with the essence of what we mean by culture … His criticism of the modern university and the lack of classical education is vital.”
—Alexander Carnera, PhD
Author and Essayist, Reviewer for Le Monde Diplomatique

“Provocative and important … We should be wrestling with the fact that our civilization is unsustainable without assuming that technological progress will keep the party going indefinitely.”
—Greg Gandenberger, PhD
Data Scientist

About Progress Debunked
Despite accelerating technological advances, most of the world remains in dire poverty. Despite the triumph of “family planning” in the West, traditional religions are winning more converts worldwide—and having more children—than the more progress-minded. And despite the 20th century’s seeming victory over Social Darwinism, the end result of Western “progress” is a civilization that uses five times its share of natural resources, leaving the rest of the world to pick up the scraps of our unsustainable growth.

Award-winning author and independent scholar Samuel Thomsen engages this question armed with a groundbreaking new argument, employing modern evolutionary theory, Malthusian demographics, and evidence from molecular genetics and anthropology. He leads us to several compelling and surprising conclusions: that the very idea of world progress is logically incoherent; that our oldest traditions contain vastly more wisdom than modern science; and that animate life, in its essence, thrives on a fertile balance of both creation and destruction, both joy and suffering, both good and evil.

About the Author
Samuel W. Thomsen is a writer, philosopher, and software developer living in the Rockies with his wife and some brilliant, rambunctious little ones. He holds an Honors degree in Physics from Caltech, and master’s degrees from the world-renowned departments of Philosophy and History and Philosophy of Science at the University of Pittsburgh. His essays on technology, education, and metaphysics have appeared in several journals, including Studies in History and Philosophy of Science, The Salt Lake Tribune, and The Sydney Traditionalist Forum. He blogs at http://www.samuelthomsen.com.